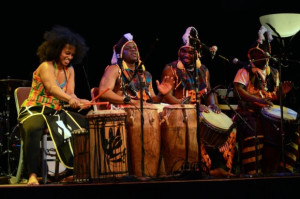 Titambe Drum and Dance Ensemble was established February 2001 in Copenhagen Denmark as a multicultural performing arts organization. We have performed all over Denmark, in Amsterdam, Norway, Sweden, Finland, Germany, and various islands in Europe.

In 2003, the founder and artistic director Christian Yao Adeti relocated to the United States of America and formed another branch of the Titambe Drum and Dance Ensemble Company in Minnesota – Titambe West African Dance Ensemble. This group has done African dance performance in various venues in Minnesota, as well as in Texas, Chicago, Wisconsin, among others

Titambe West African Dance Ensembles mission is to preserve traditional African drumming and dance heritage as well as promoting cultural understanding. This is done by educating audiences of all ages about different African countries through language, music, and movement for a better appreciation of diversity. Through performances and dance lessons in Minnesota, we are able to reach out to the communities.

Titambe Drum and Dance is committed to sharing knowledge, building long lasting relationships with their community and its leaders, and developing professional artists that will produce quality productions. These artists are mainly comprised of Ghanaians, Liberians, Kenyans, Trinidadians as well as American born.

“Titambe West African Dance Ensemble believes that with traditional dance and drum we can gentle unlock the ancestral vibration that has been covered for centuries, which involves peace, love and unity.”

ABOUT THE ARTISTIC DIRECTOR

Christian Yao Adeti was born and raised in Accra-Ghana, West Africa to a family of thirteen siblings. Since he was six years old, Christian has loved traditional African music and dance. It was then that he joined a drama group in his church and started exploring dancing and acting.

He danced with a local troupe called OMEGA 7, which helped him improve his talent. Later in high school, he established the theatre and dance group called Bright Future. They toured around at schools and won a few awards.

Christian’s love for performing propelled him to become a member of the traditional dance ensemble, Hayor Dance Company at W.E.B Dubois Memorial Center of Pan African Heritage. Through the company’s recognition, Christian became well-known in the Ghanaian community, and traveled to many African countries to explore African music and dances.

He began to perform at different festivals like Panafest, where he was awarded a certificate for “best performance”, and he even expanded his horizons through various film projects in Ghana. Christian became a significant member of the dance company and often assisted with arranging classes for young musicians and dancers. He was also involved in a project that invited students from various countries to Ghana to experience the African culture.

In 2003, Christian moved to the Minnesota in the United States. With an enormous passion for West African drumming and dance, Christian still continues to do what he loves the most, teaching West African music and dances.

He has taught at many colleges and universities such as Carleton, St. Olaf, St. Mary’s University of Minnesota, Hamiline University and the University of Minnesota. He has also taught at various organizations and local institutions such as Minnesota’s African Women Association (AIDS are winners), Elom International Academy, Park Center and Northview high schools, etc. He is currently in collaboration with various companies such as Powder Horn Phillips Cultural Dance Center, Young Audience of Minnesota, and the Minnesota Philharmony Orchestra. As Christian continues to share his knowledgeable skills of African music and dances, he is now the founder of a new project created essentially for kindergarteners’ story telling, Minamife (Children let us play).

As his occupation varies after 14 yrs of experiences, Adeti is currently the instructor at the Hennepin Center for Arts and the Minnesota Shubert Performing Arts& Education Center. As a reputable drummer, dancer and an instructor, he wants his tradition to gently unlock the ancestral vibration that has been covered for centuries, which involves peace and love to the whole planet earth.